The Houston Livestock Show & Rodeo officially announced its concert lineup for the 2020 season. Nearly half of the performers are newcomers to the rodeo with veterans returning to the stage including Luke Bryan, Brad Paisley, and Chris Stapleton.

“The Houston Livestock Show and Rodeo is proud to bring such a wide range of musical genres to the RODEOHOUSTON stage,” Joel Cowley, rodeo president and CEO, said in the release. “With 12 great country acts, we remain true to our roots while presenting a lineup that reflects the diversity of our great community. These 17 acts bring a great deal of excitement to the 2020 Rodeo and the excitement will continue when we announce the three Friday performers on Feb. 4.” 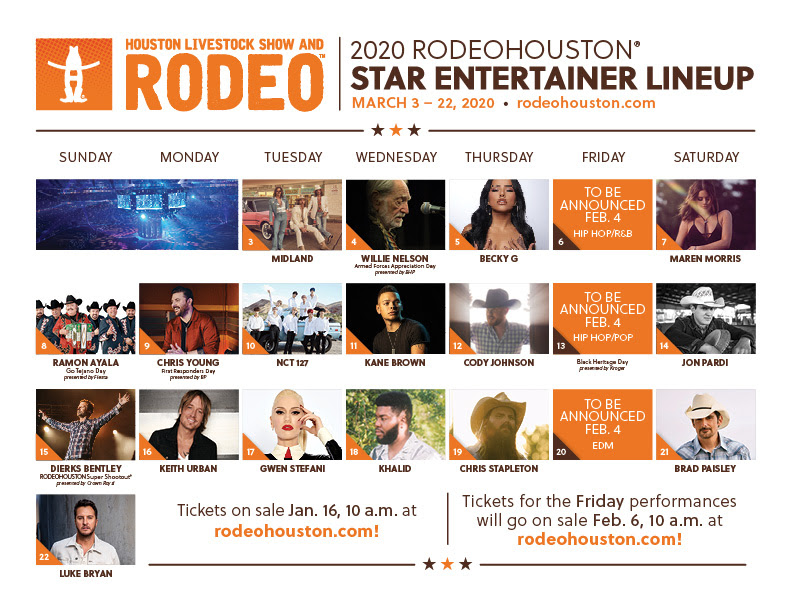 The following entertainers will perform at this year’s Rodeo Houston at NRG Stadium, March 3 – March 22.

Tickets will go on sale Thursday, Jan. 16 at 10 a.m. through AXS Ticketing via rodeohouston.com. The AXS Ticketing online waiting room will open at 9:30 a.m. for the 17 announced entertainers, and tickets for the remaining Friday performances (announced on Feb 4) will open on Thursday, Feb. 6 at 10 a.m.

Rodeo Houston is held at NRG Park which is only minutes from Pearland. As one of the one of the most-attended events in Houston, Rodeo Houston draws several visitors to Pearland hotels as well with easy access to NRG Park just off Highway 288. Millions of people enjoy the rodeo for the barbecue cook-off, carnival, rodeo competitions, livestock auctions, art auctions and several other activities, but its concerts gain the most attention.